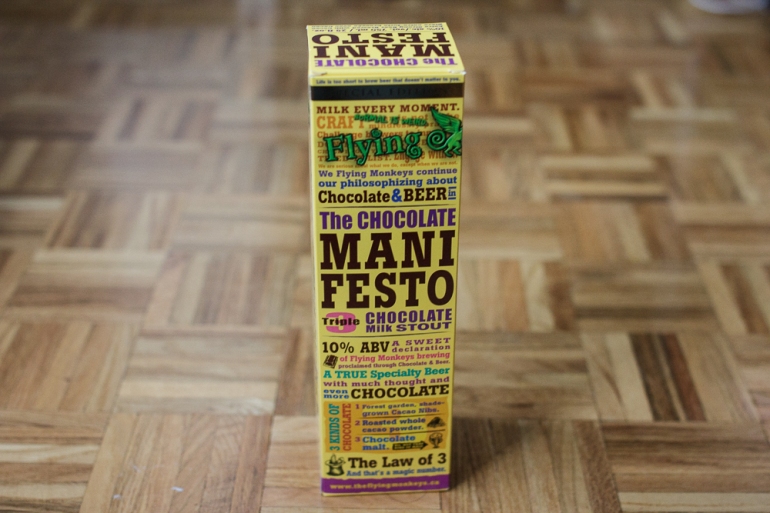 Perhaps this post title is misleading because monkeys don’t actually fly so no actual monkeys were involved in making this beer (at least for all I now). The Flying Monkeys is a craft brewery located in Guelph, Ontario. When I stumbled on this beer, in such eye-catching packaging I could not resist. Hell, they probably could have just put CHOCOLATE BEER on the label and I would’ve bought it. This was more obvious. This beer was more than the normal “chocolate” stout. It sounded epic. It was a Manifesto. It had an alcohol rating of 10%.

We saved the one bottle we snagged for New Years Eve. When we opened it the aromas were splendid. It truly did live up to it’s name. It did not smell like beer, but like a comforting chocolate milk. The strange part is, that’s what it tasted like to! The fact it was a beer, only hit you after every sip. It was delightful. Also, I could totally feel it right away after a mug full (I don’t have anything besides mugs at the moment).

I went back to the LCBO the next day to realize that it is no longer stocked in shelves. I guess I will have to wait until next Christmas to buy the entire aisle.

One thought on “Chocolate Beer Made by Flying Monkeys”