Last week a co-worker and I happened to be at an event across the street from Wahlburgers’ recently opened Toronto location at the SoHo hotel. It’s opening had been hyped considering the ties to Mark Wahlberg so we decided to try it out. I ordered the OFD Burger and Sweet Potato tots (pictured above).

The burger was an 8oz beef patty, housemade tomato jam, bacon, swiss cheese & sauteed mushrooms. I didn’t find it particularly memorable, and it was a little bit oily to hold. The sweet potato tots however were very addictive (as advertised on the menu) and the perfect mixture of sweet and salty. The way they had cut it gave a crunchy outer shell that would reveal sweet and soft insides.

To drink, because I am a cocktail fiend, I had their “Wahlcoction” called The Wahlbanger which was orange vodka, vanilla liquor, peach juice and sparkling wine. It tasted like a creamsicle! 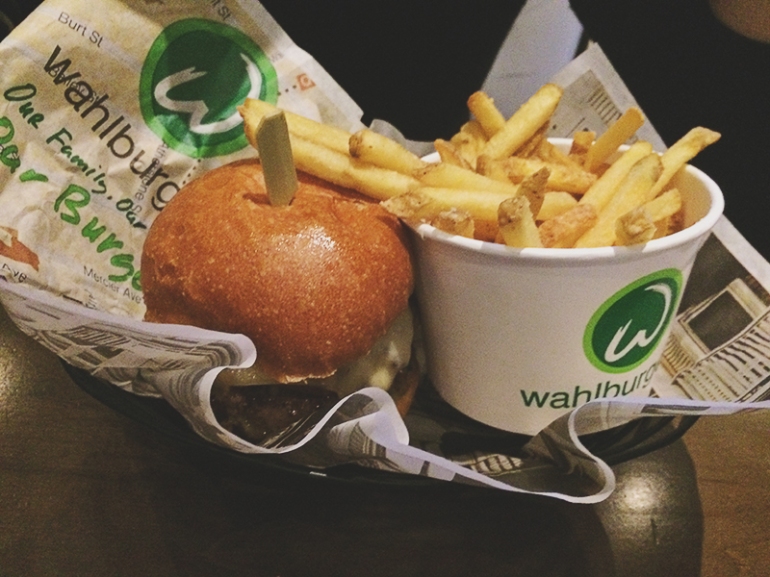 My co-worker had the BBQ Bacon burger and he also agreed that the burgers were nothing special. I had one of his fries and they were okay, but not as good as my sweet potato tots.

Overall, I don’t think the burgers here are worth the hype (and the price tag). There are much better places in the city. But if you find yourself here for some reason go for the sweet potato tots!

One thought on “Wahlburgers”