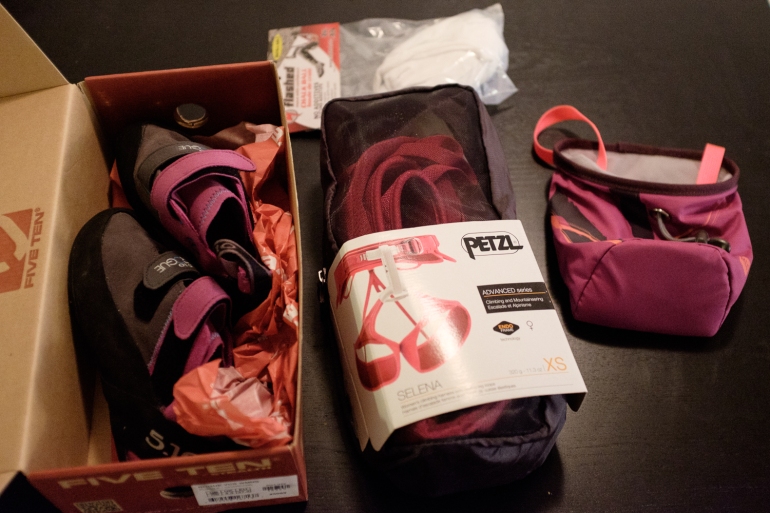 Last month, I tried rock climbing for the first time and I enjoyed it. I had a two-week unlimited pass and went as much as I could with my schedule. I realized that it was a great physical workout and it released a lot of built-up anxious energy whenever I went.In the few weeks I’ve been doing it, I already improve a lot since the first time and am tackling a lot of Level 8 courses at Basecamp. I love that there are levels so that there is always a goal to beat next time.

The trial two weeks ended but I decided to continue, so I bought a 10-pass as well as my own equipment to keep myself motivated. I couldn’t resist getting everything in pink.

I went to MEC for all my gear. I spent over an hour and a half trying different things on. When I picked out my shoes, I tried all sorts: cheapest, most expensive, laces, velctro etc. I tried each of them on their test climbing wall to see how it felt on my toes. My feet tend to be kind of fat so my toe comfort is important. However, most shoes are built to be compact, so they will feel squished no matter what. I settled on a pair of moderately priced Five Ten Rogue’s because they felt the best.

I also tried on a bunch of harnesses and settled on the Petzl Selena Harness in XS. While I was at the gym, I found I took forever to put harnesses on because they were generally too big, but this one is specifically for females and had a super small size that was comfortable. Plus, it is pink! 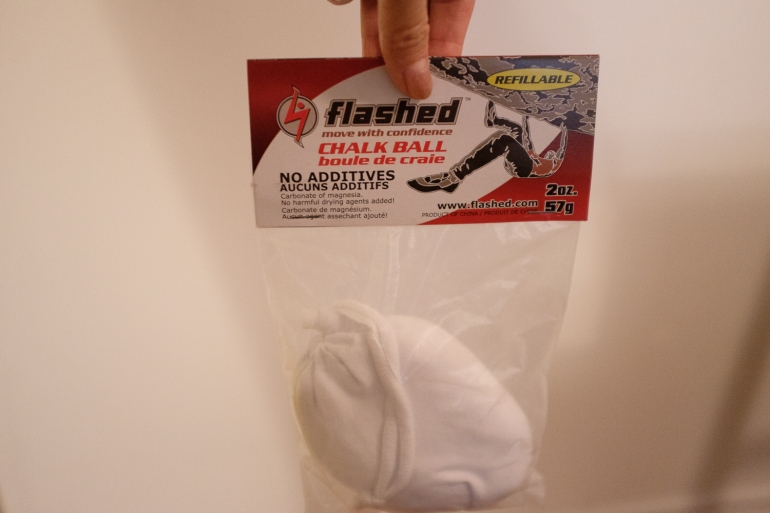 I bought a normal chalk ball, which was recommended for normal hand sweat. I think there was a different one for those that sweat a lot.

And a cute bag to match my harness!

We climbed some rocks @climbbasecamp

On Friday, I took the Introductory Climbing Lesson at Basecamp. The package came with 2 weeks of unlimited climbing and I already went back on Thanksgiving Monday.

I don’t do a lot of exercises or physical activity, but I surprisingly enjoyed it. It was challenging, and I definitely felt a bit of pain the next day. However, I’m already excited to go back!

It’s fun, and goals seem measurable. I felt like I lost a lot of anxious energy in the process and felt certain rushes that were a bit addictive. I was frightened to jump off an auto-belay (still am a bit) but the rush of falling on it is alluring.

I’m going to keep going when I can within the two weeks, but I can totally see myself continuing and buying my own gear. Maybe eventually I can lead climb and do real mountains!

I don’t know if it’s like the drastically changing season here or something, but I’m feeling a bit down, like I need to hibernate for a while. Maybe I exhausted a lot of energy lately and it’s catching up to me.

Life’s not always peachy and I’m feeling a bit anxious about many things but I’m also excited (but starting to stress about all the things I need to do) about my future wedding. There are many days where I feel the genuine peaks of happiness but then an occasional wave of depression hits and I feel exhausted.

Whatever it is, this autumn anxiety is real and I want to acknowledge it. I know I have been a bit absent from this blog after I broke my streak, but I think those breaks were needed. I don’t necessarily owe anyone an explanation why I haven’t been blogging that much, but I want to continue to acknowledge my mental illness if it makes someone out there feel less alone. 7 years ago, I made a conscious effort to deal with GAD unmedicated and I don’t regret it but some days are hard.

Today I learned of Chester Bennington’s passing. I’d fallen out of fandom of Linkin Park as I grew up but when I was in high school albums like Meteora, Hybrid Theory and even Collision Course. Their depressing and lyrics complemented my teenage angst.

I remember excitedly playing the piano melody to “In the End” for everyone in class when it first came out. Whenever I had problems in life I would put on my headphones and blast songs like “Crawling” or “Numb”. These worked whether I was sad about relationships or my parents. It didn’t really matter. I related to the (somewhat suicidal in retrospect) lyrics. It probably gave me life.

It is sad to know that while Chester saved teens like me, he wasn’t able to save himself.

Today, Chris Cornell of Soundgarden passed away because of reasons you can look up yourself.

In short, he took his own life. Afterward, I’ve seen too many people post things along of “Get Help” and insert some random link to a hotline. I know everyone means well but from personal experience as an OCD depressive person, I can tell you now that none of that shit helps. Often people who are down don’t know they need help or don’t think they deserve it in the first place.

You will not likely change someone who is down in the dumps’ life for posting that stuff. What is more valuable is taking the time to reach out to those you personally know who might be suffering and showing you truly care. Don’t just fight the stigma of mental illness. Fight the fact that you have to survive it alone.

It’s an awkward thing to talk about.. but I hate my monthly friend. These visits have been occurring since I was 10.

For 3 days, I feel like I can hardly move because it’s hard to. It comes down heavy like a thunderstorm. But during a thunderstorm, you can see the clouds receding.

I’ve tried to lure them away with Tylenol, and other prescriptions. I’m hormonally imbalanced enough without messing further. I’m afraid the combination would turn me into a terrible person.

I’ve grown up now but my monthly friend still visits. It comes by during work, when I’m out friends when I’m at music festivals and ruins my day. It’s debilitating.

Sometimes I don’t let it defeat me, but I think occasionally it is ok to admit defeat. I am human. I am currently in bed writing this blog post as I wait for my Uber Eats. And I will probably fall asleep after on this Friday night.

How do you deal with your friend? I’m open to trying natural methods.

My friend had a Thera Cane at their house and somehow a group of us sat around using it and slowly one by one my friends all started buying one. I knew my time would come and it did. I ordered one on Amazon.

It looks like a super ridiculous stick thing that you could probably plant tomatoes with but the knobs are great for deep pressure massaging. This helps get me through the day between massages, which I get once a month to ease my anxiety.

The Thera Cane comes with a book of helpful diagrams of positions and pressure points. Some are a little bit more advanced then others. I use it mostly on my shoulders because that tends to be where my body is the most tense.

Now that I’m getting older, I totally appreciate anything that helps take away aches and pains.

There’s so much going on in the world that I start to constantly feel guilt that I am not paying attention 24/7. Anxiety is feeding on more anxiety and I know that it’s not healthy.

Being connected has always been a part of my personal life and work, but now more than ever I am trying to convince myself that it’s ok if I need time off. To stop reading, if only for a few hours.

I’ve been more politically active online and offline (through donations), but it’s ok to take care of myself too. To force myself offline for a bit, I’ve committed to more activities with friends like Monday night trivia at the bar (no phones allowed) and Board Game nights. Breaks alone are important too (but easier to catch myself back on the computer).

Does anybody else feel like they must be glued to screens at all time or feel insane FOMO/guilt? I’m here to tell you you’re not alone.

Today is the yearly Bell Let’s Talk Day. Even though it’s totally a corporate marketing campaign and the company itself has it’s own internal issues, I think it’s still a very valuable day that needs to keep happening.

Since the very first Bell Let’s Talk I participated in, I started to talk more openly about my experiences and diagnoses with anxiety. It’s kind of stupid but having a day, or a hashtag felt like a wall I could hide behind and it felt safe and I soon realized that many of my friends face similar challenges and that I’m not alone.

Though I tweeted a few posts today, I stepped back from the amount I would normally talk today. Instead, I read everybody else’s posts. I saw some people open up with things I would’ve not known otherwise. I reflected on how I will be more patient and understanding to certain people. I reached out to people to let them know I’d do what I could to help them when they needed it.

Days like this, corporate or not, will not stop being important until we all make efforts to make this an important discussion every day, ask our leaders to increase funding for programs and allow people in our lives to feel safe asking for help.

Carrie Fisher died yesterday from a heart attack at the age of 60. She was most known to the entire world as Princess Leia from Star Wars.

To boys, she was an object of their fantasy, but to women, she was a feisty but powerful person both in the films and in real life.

She was also against sexist standards and body shaming. “Stop debating whether I aged well,” she said in the Guardian.

She taught me to be open and brave. She taught thousands of girls that we can be both the beautiful princess and a fearless leader.