Last weekend, I was in Québec city for Festival d’été. This year, I did more exploring of the city and surrounding areas.

It looked like it hasn’t changed too much over the years and stocked a lot of specialty products. I ended up getting some sodas to try. 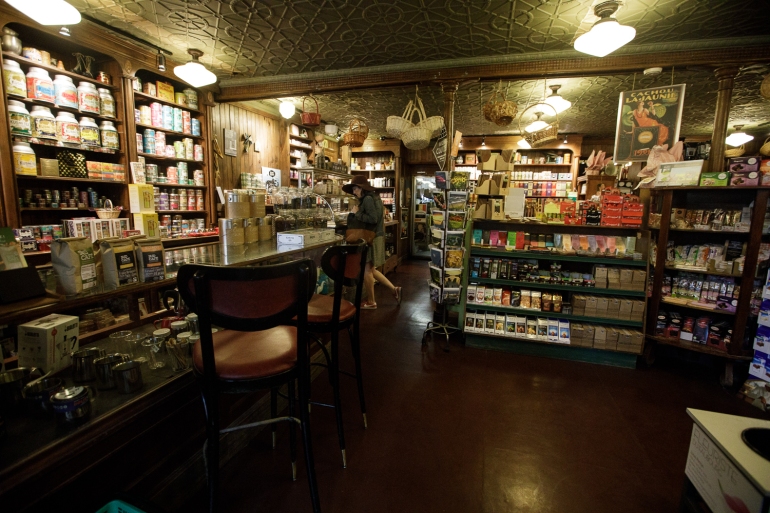 I also had the privilege of going on the Island of Orleans food and drink tour. It was a 3 hour tour where we were taken to the beautiful island of Orleans that was a different world only 15 minutes away from the city. The vegetation there was lush and we sampled wines, ciders, sweets and jarred things. It was a lovely escape from the hustle and bustle of a city. 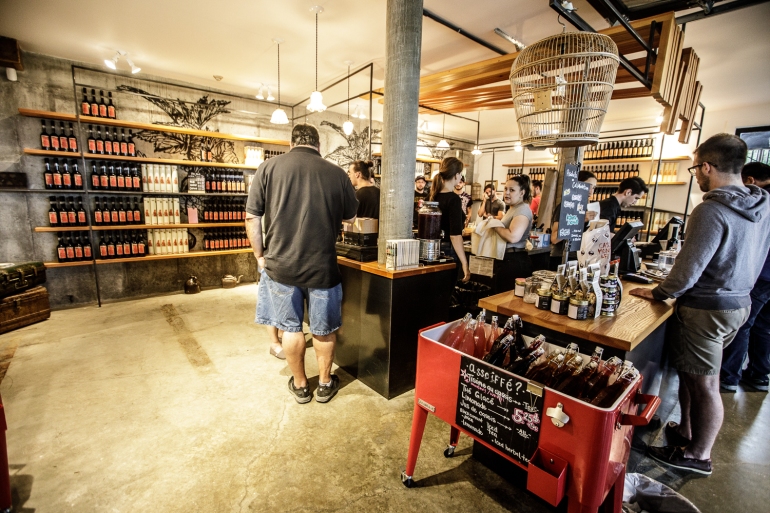 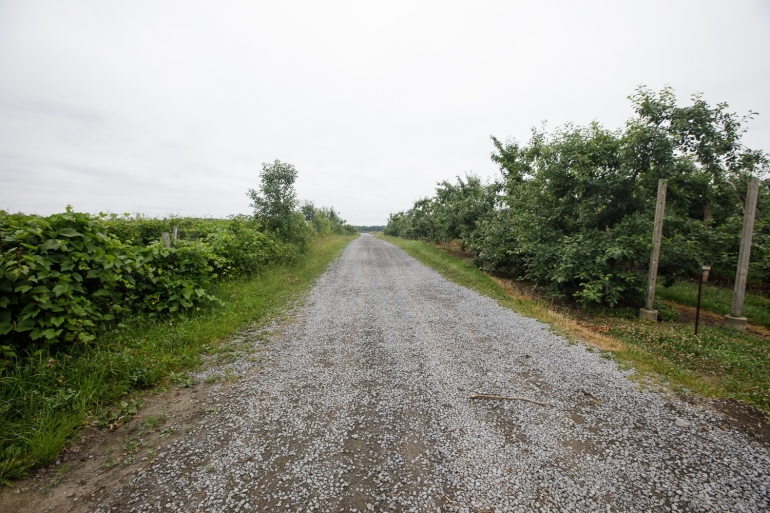 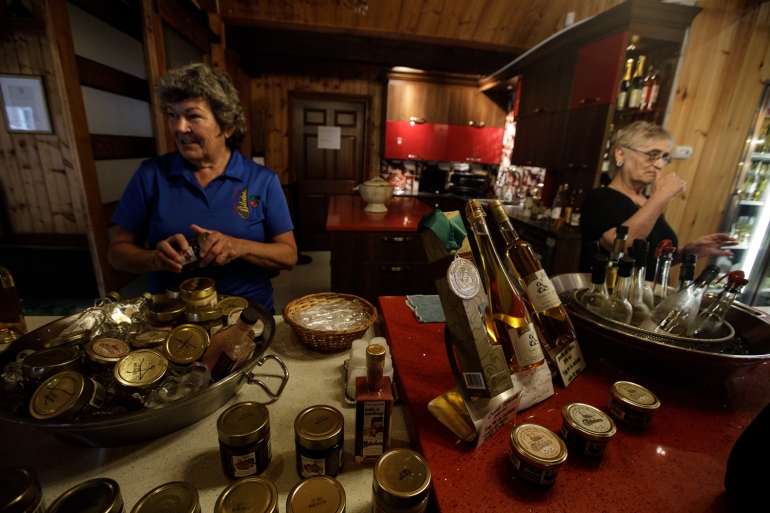 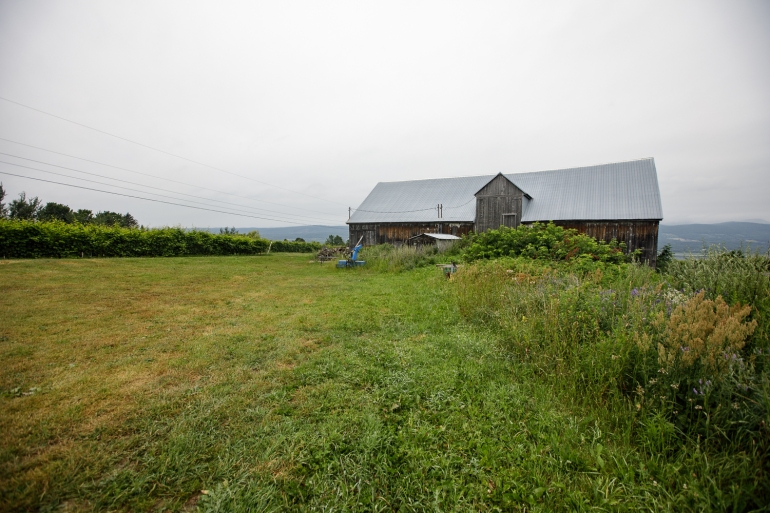 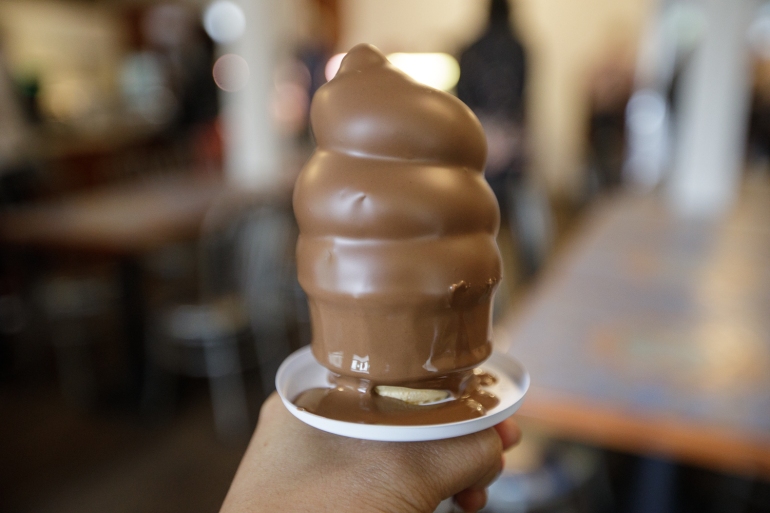 I finally tried a Pablo Cheese Tart because I was in the neighbourhood and didn’t see a long line. I didn’t realize that the tart that everyone’s been Instagraming is as big as a cake when you buy the full thing.

I got the original Freshly Baked Cheese Tart. I waited until I got home to have a slice but it traveled well and the filling melted in my mouth. I like the lemony top and the texture of the tart that doesn’t feel too heavy.

I’m not sure if I’d ever wait in line for one of these, but it was worth trying once!

On my recent Chef’s Plate order I made a Seared Steak & Balsamic Shallot Jam with a spinach salad and parmesan potatoes.

This was an easy meal to make and super flavourful. I love how easy it was to make the shallot jam. I don’t normally buy shallots, but I think I can replicate something similar with onions.

Want to try Chefs Plate? Use the code #3platesFromtianafeng for 3 free plates!

A few years ago when Nash and I were underemployed, we’d walk past Actinolite and joked that one day we would go there when we could afford it. Though we’ve had just as fancy meals already, I finally remembered to actually go here so we did it for our Christmas dinner date.

We chose to do the full Chef’s Menu and the wine pairing. The first was a beautiful apple salad.

Then there was a snack of salmon and capers.

I couldn’t stop eating the perfect sourdough bread and butter from the town of Actinolite, a town in Central Ontario.

Hen of the woods in elderberry and pine butter was probably our favourite dish.

This was a duck dish, but I ate it before I took a photo. It was just that good!

I did not know carrots could be elevated so much until I had these blackened ones.

This ice cream with butternut squash and toasted lichen was a lovely complex dessert.

Finishing off the night were these biscuits with marshmallow.

This meal was definitely worth the wait and our years-long excitement of going here!

My cousin went to Japan and brought me back this Pikachu branded thing. At first I thought it was beans or something, but on closer inspection, I realized it was curry. I can’t actually read Japanese but the instructions were easy enough to find online after I figured out what it actually was.

Inside was the two packets of curry, and a Sharpedo card. I love that whenever you buy Pokémon branded things there is some sort of collectible. 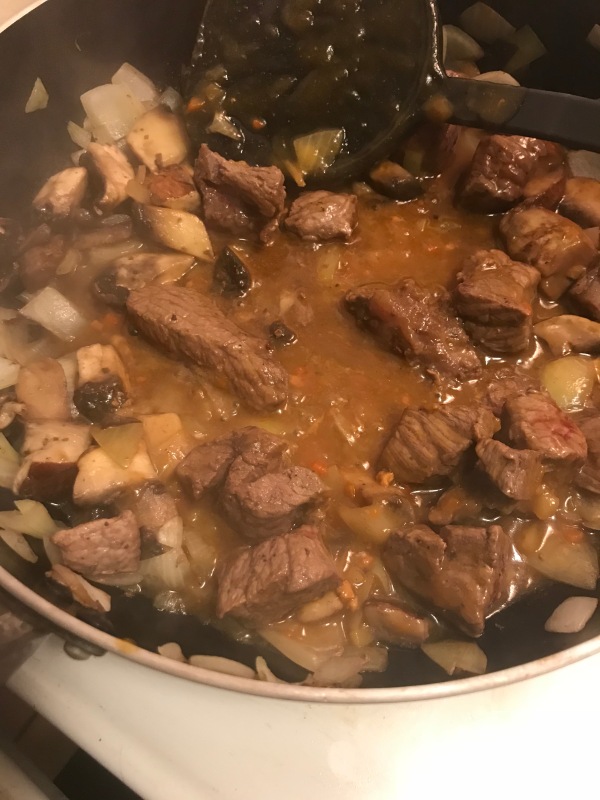 I decided to add my own ingredients to the sauce. Little did I know was that it had it’s own tiny dehydrated vegetables that hydrated themselves as I cooked it. If you look carefully, there’s tiny carrots and onions.

The curry itself is sweet like most Japanese curries. I think it’s meant to be eaten just plain on rice, but that’s not much of a meal so I made it one!

For Nash’s birthday a while back, we went to LOKA. His schedule lately has been hectic to plan anything in advance but we happened to get a day-of reservation for 8pm. I couldn’t resist the Ginger Old Fashioned that was on the chalkboard outside.

LOKA specializes in Canadian cuisine and they have both a Vegetarian and General “Eat Everything” option. We ordered both and the charcuterie board. They started us with a little amuse bouche that wasn’t listed but I could’ve eaten an entire bowl of.

The charcuterie is all made in-house. My favourite was the fatty duck, but we devoured the entire thing so fast. 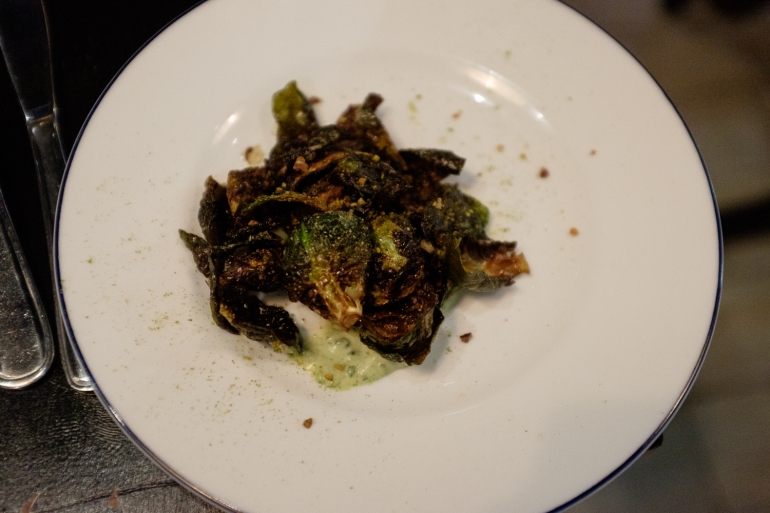 Brussel sprouts served with a chive emulsion and pistachios is how I want to eat healthy vegetables forever.

I’ve also never had fiddleheads, but these tempura pickled ramps and fiddleheads was accompanied by a beautiful mayo.

These baby beats were also full of flavour and topped with a bit of delicious blue cheese.

On top of sourdough we had white bass rillettes with creamed cabbage.

This was a handrolled pappardelle with charred radicchio and kale cream. 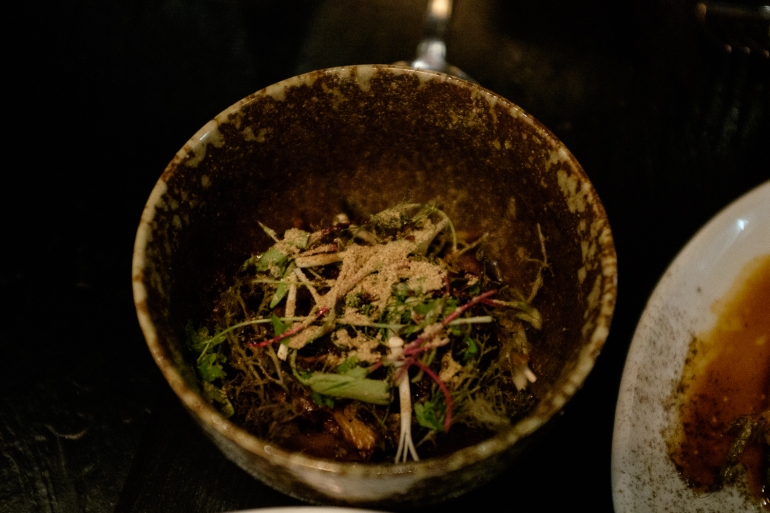 One of our most memorable dishes was this pan seared mushrooms, truffled potatoes and deer lichen combo. 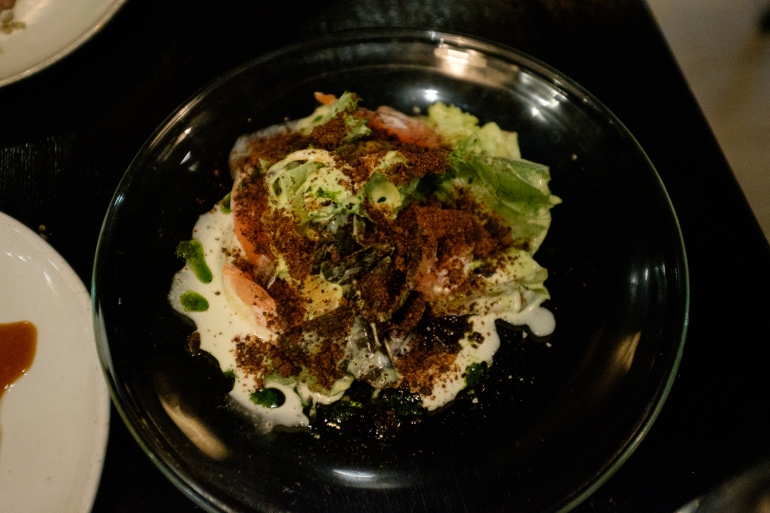 There was a salad of lettuce, heirloon tomatoes topped with green garlic dressing and burnt bread that almost imitated bacon bits!

We had this palette-cleansing thing made of beats that could’ve been like a dessert on its own.

The actual dessert was a caramel chocolate mousse with almond crunch and berry preserve. There was also a crunchy marshmallow.

I told them it was Nash’s birthday and he received a sparkler in his:

I loved this meal a lot! It might be one of my favourites this year and I can’t wait to come back occasionally to taste the seasonal selections.

It was -5 degrees Celcius on Friday, but the upside was that there was finally no line at iHalo Krunch, Toronto’s first charcoal ice cream place.

I felt it was sacrilegious to go there and not get at least partially black ice cream so I got the ube nut, which combines both the ube (purple) and black coconut ice cream. Another plus is that it looked nice for Instagram. I loved the flavour of ube, which is a popular yam-like ingredient in Filipino desserts.

The cone also has charcoal, and the very bottom was stuffed with marshmallow Fluff, and prevented the ice cream from dripping. I’m glad I didn’t have to line up for this, but it doesn’t disappoint either way!

Two of my friends and I recently tried out Skippa, a relatively new Japanese restaurant on Harbord Street. Skippa’s specialty is a shorter omakase ($47) where you can taste all 9 pieces of specialty sushi.

It’s not enough food to make you full on its own, so we also ordered some other things from the menu. I can never resist oysters, and these ones from PEI were presented beautifully on a bed of marbles.

I also saw this Pikachu looking character on sake on their Instagram, so I couldn’t resist. 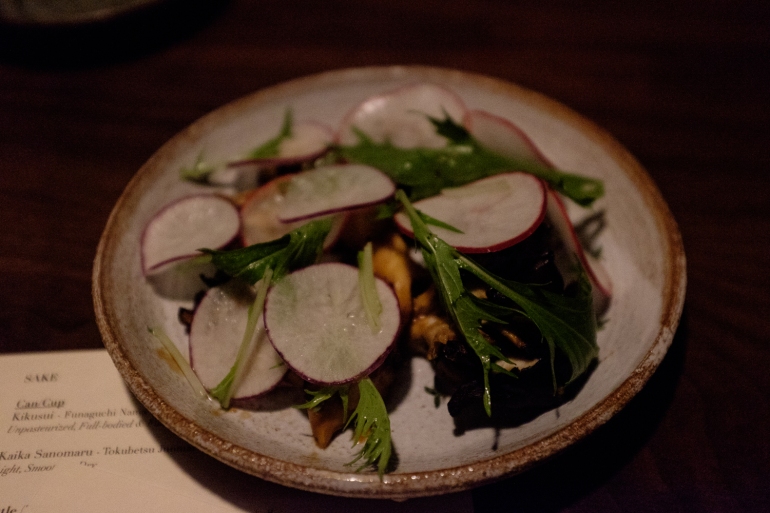 Their black maitake mushroom salad with radish and miso was delicious. 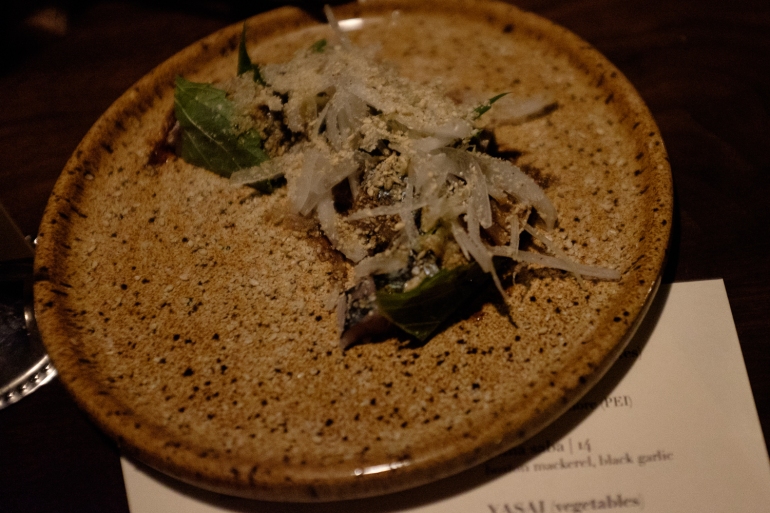 We also got the black garlic mackerel.

All the sushi was presented beautifully and simply. With each one, there were instructions to dip or not dip in soy sauce.

I thought the fish in the sushi was very fresh. However, I felt a few of the sushi had too much wasabi that it overpowered the flavour of the fish. Otherwise, it’s beautifully simple.

After a good but pricey dinner somewhere recently, my friends and I felt like we could still eat so we wandered around Dundas West looking for a Snack. We landed in the cozy 86’d, where Moto Snack Bar used to be. The menu rotates constantly, but the night we were there had a sardine.

Fried to perfection, the fish had all its bones removed. It was served in a green pesto and the fish had just the right amount of salt. It took more than 10 minutes to come out and we devoured it in seconds and promptly ordered a second with no hesitation.

They also do drinks on the fly inspired by things you like, and I mentioned I liked Old Fashioneds. 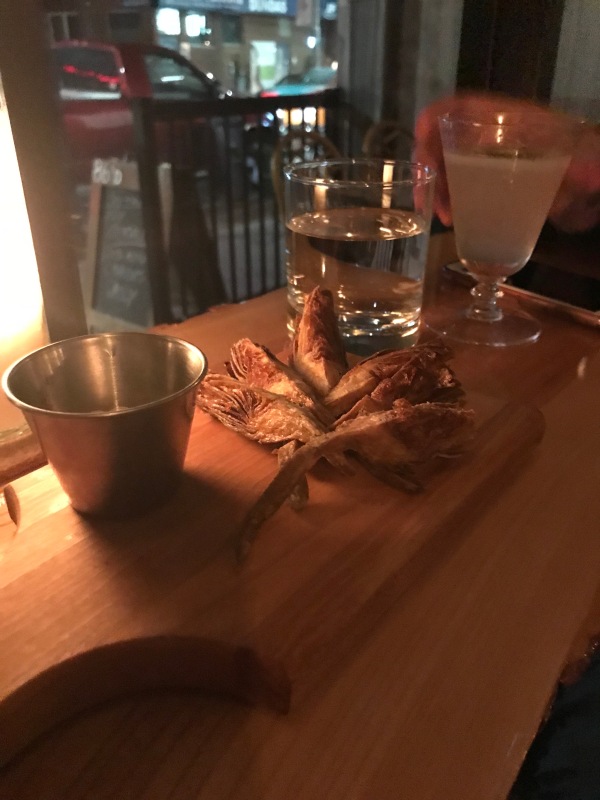 We also had fried brussel sprouts, which were also very good but no match for the sardines.

I have followed them on Instagram, just to be aware of the sardine schedule.

I love learning new techniques to cook fish, so I chose the Pescado Cubano recently from Chefs Plate. It was a tilapia dish that was marinated with a spicy kick.

I loved that the rice was also cooked with the spice with peppers. There was a fresh slaw with cilantro, onions and peppers on top of the fish that I also really liked and I cooked my fish perfectly. Now, I feel more confident to buy my own fish from the grocery store and include it more in our diets!

Try Chefs Plate for free with my code: 3platesfromtianafeng