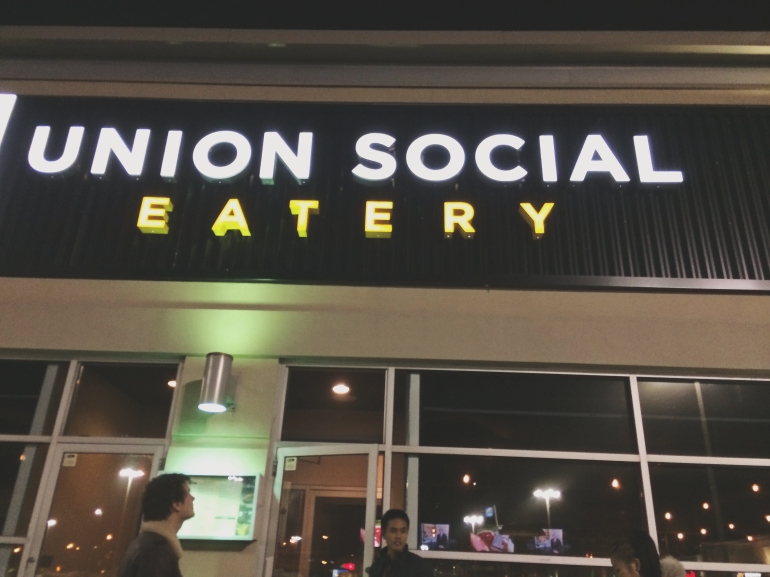 For my birthday, I hit up Union Social Eatery at their Mississauga location with my family and Nash. We ordered a little bit of everything from the menu.

As a starter Nash had the Killer Soup ($4.95). The type of soup varies every day and his was a Potato Bacon. He said it was okay, but it had corn which was unexpected and less creamy than he thought it would be.

These Parmesan Truffle Fries ($7.84) were very flavourful and addictive. The truffle flavour was only from the oil but that didn’t stop me from eating them all.

The House Braised Short Rib Firecracker was crunchy and served with a sweet chilli sauce.

Since it was my birthday I thought I’d try the Social Punch which was made with Amaretto, Southern Comfort, orange, cranberry and pineapple juice. It was so delicious I drank it before our food came.

A few people ordered the Steak and Sushi which was a cute take on surf and turf. The steak was cooked in a Korean beef sauce and sliced and sprinkled with sesame seeds. The shrimp in the sushi was fried and it had a nice crunch.

Nash had the Korean Swordfish Steak ($18.98) served with veggies. I’ve never had swordfish before and I enjoyed that it wasn’t fishy tasting.

I ordered the Steak Frites ($19.73) but since I ordered truffle fries as an appetizer, I replaced it with a Candy House Salad. The steak was very juicy and flavourful. The Candy House salad was sweet and there were mini surprises of figs, mango, walnuts and more in every bite.

All the food was beautiful and delightful and I would definitely recommend it for a nice night out.